This was the day where nothing really went as planned, but it ended up being one of our favorite days of the entire trip!  It started with an absolute torrent of rain at 4am that woke everyone up.  It literally sounded like someone was pouring buckets of rain on our cabin!!  Since we had been in Africa, we had driven on one paved road.  Most are dirt roads, so rain can really complicate things.  Our schedule for the day was to visit the Hadzabe tribe and then drive to Ngorongoro Crater for the Maasai market.

On our way to the Hadzabe tribe, we came around a corner and saw the most incredibly massive raging river!  We stopped and walked to the bridge to take pictures – we were all in awe.  I’ve never seen anything like this in my life.

After we all finished gaping at the river, we continued on to meet up with the Hadzabe tribe.  We drove for a while and all of a sudden these three small boys come running up alongside our jeep!  Lema stops and says that he’s pretty sure these are Hadzabe boys heading back to the rest of the tribe.  These boys are all dressed in baboon skins and are so excited to see us.  Lema gets out and talks to them and they tell him that they can show us where their camp is.  Lema offers them a ride, so they scramble on top of our jeep and hang on to the rack on the top.  This was another of those “only in Africa” moments – three young boys dressed in baboon skins, probably no more than 10-11 years old, perched on top of our jeep when it’s raining outside.

Lema gets back in our jeep and we continue on with the boys atop our vehicle.  He tells us that these boys were out for an early hunt and were headed back to their camp to meet us.  He also told us they would probably be in big trouble when we arrived because there is an expectation of not taking shortcuts and the elders of the tribe would probably scold them for taking a ride when they should have walked.  We drove for a little while longer and all of a sudden we heard all this thumping on the roof.  Lema started laughing and said that they were telling him to turn here to get to their camp.  We drove down this little road to a large flat area and came to a stop.  There was a large rock formation in front of us, and that’s where the Hadzabe currently live.  As soon as our jeep stopped, the boys scrambled down from the top of the jeep and took off running towards their camp!

The Hadzabe tribe is one of the last true hunter-gatherer tribes in Africa.  They are nomads and move with the herd and just set up camp along the way.  As soon as we get to their camp, it starts raining steadily.  We don’t care though – we’re excited to see these people!  We go into their camp and see the women and children first.  They greet us and the kids smile and grin at us and Lema tells us that we are free to wander around and look at their camp.  There are lots of grass huts set up around and we see meat hanging on sticks – drying out.  It looks like jerky!  We wander around a little more and then Lema and Banga tell us that we are going to move to a different area of the camp.  We walk down this little trail and around the corner and this is the first thing we see: A baboon head on a stake!  After we walk past the baboon, we are immediately greeted by the men of this tribe.  They all nod and smile and shake all of our hands and are incredibly welcoming to us.  We see the boys that rode on our jeep crouching by a fire and they smile at all of us, too.  Banga and Lema start telling us about their tribe and how they make their own bows and trade honey for arrows that the Datoga tribe make.  Their chief is determined by the best bow shooter in the tribe.  Their current chief is a younger guy who is very welcoming to us.  He talks to the other men and their language is made up of a lot of sounds and clicks.  It’s very guttural and completely fascinating to listen to.  After Banga finishes talking to us, the chief walks away and comes back with some of that meat we saw hanging up.  He talks to Banga and Banga explains that this is baboon jerky that the chief wants to share with us.

At first, I am moved because this is THEIR food.  They have to go hunt every morning to feed all of the mouths in their tribe.  And here they are sharing their food with us.  Then, I realize that the meat belongs to the head on the stake and I have a harder time getting my mind around eating this.  I consider myself an adventurous eater (I’ll try anything once!), but I just can’t get there in my mind.  The chief walks around slicing pieces off for us.  He holds a piece out to me and I take it and thank him.  I hold it and examine it and decide I just can’t do it.  Mike eats his and described it as “gamey” but not bad.  I give my piece to him and Mike eats that one, too.  I feel good that it hasn’t been wasted.  If it had come between throwing it out and eating it, I would have eaten it.  But luckily it didn’t come to that!

A few of the tribesmen start demonstrating how to build a fire with two sticks (NOTE – it is still steadily raining!), and they start motioning to people to join them.  Mike gets the wave, so he crouches down and they show him what to do.  Mike takes over and GETS A SPARK!  The men all slapped him on the back and were very excited!  We spend some more time taking pictures and then it’s time to start heading out.  It literally has not stopped raining the entire time we’ve been here.  We walk back out to the main area and gather.  The Hadzabe people perform a song and dance for us and I find myself amazed at how joyful they are!

This tribe was amazing and I really enjoyed our time with them!  I loved my pictures, too! 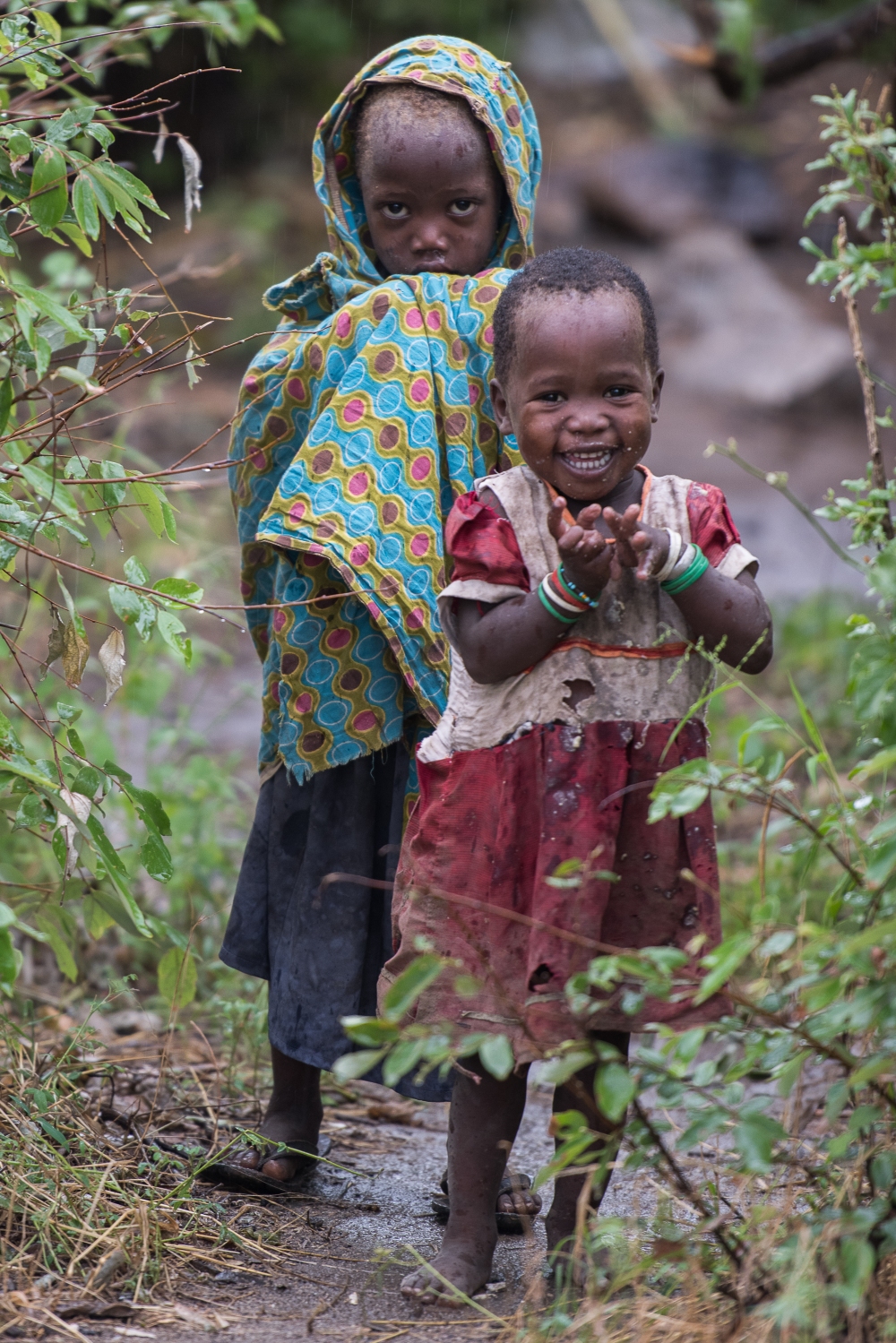 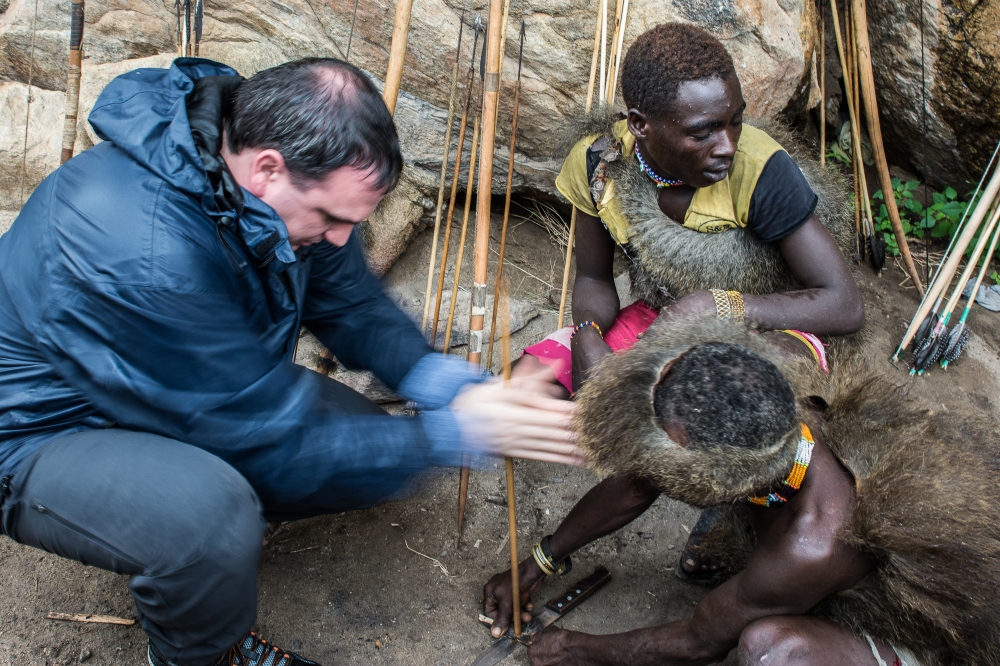 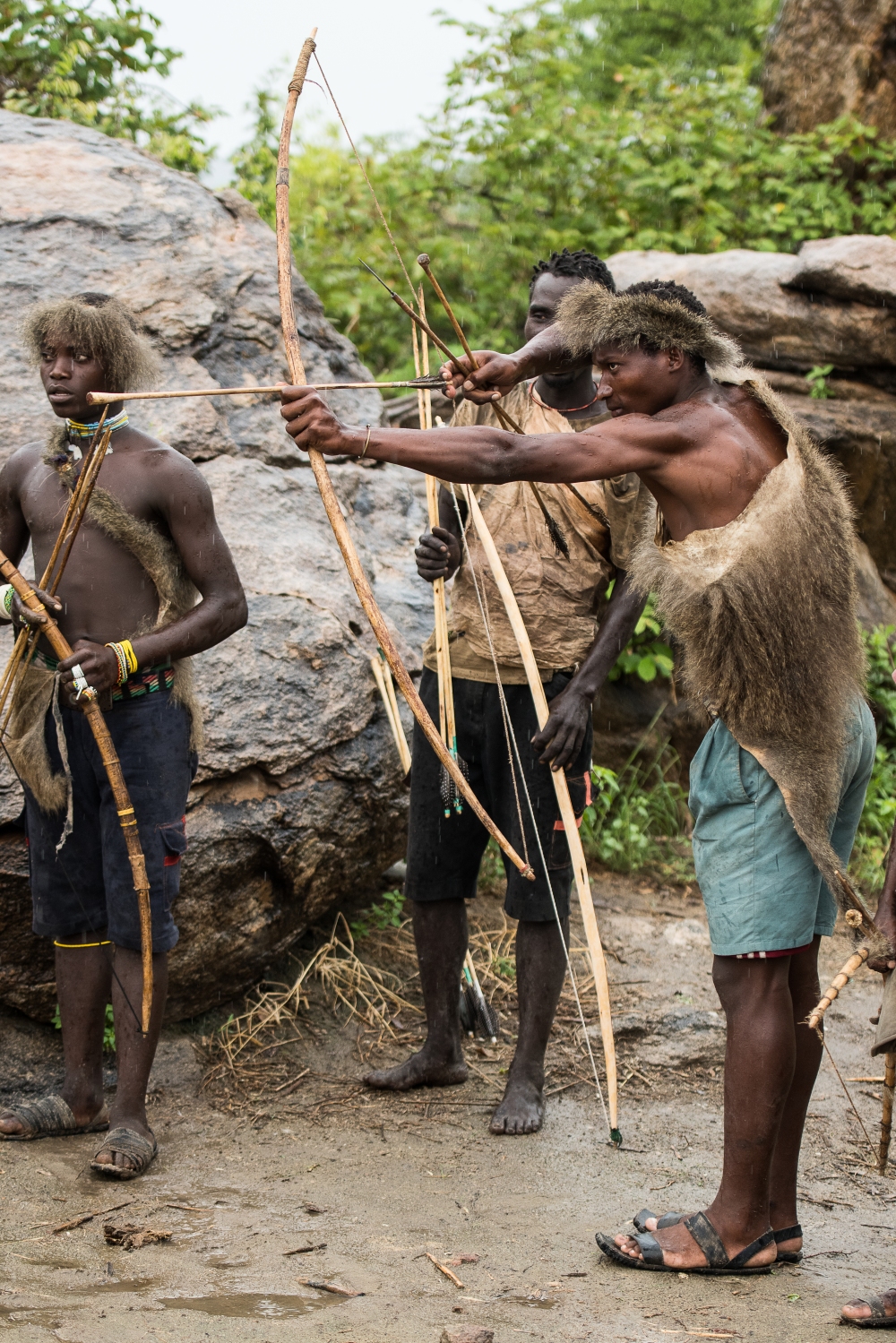