In my last post, I said that our plan for this day was to visit the Hadzabe tribe and then drive to Ngorongoro Crater, where we would attend a Maasai market.  We left the Hadzabe and began our journey to Ngorongoro Crater.  As you may remember from the last post, it had been raining all day.  The majority of roads in Tanzania are dirt.  Needless to say, our driver, Lema, was concerned that we would run into a problem.  We weren’t too far along when we came to our first flooded road.  At first, it was hard to tell how deep the water was, but then we saw some people walking through the water in our direction.  Lema said he wanted to watch them for a bit to see if the water got deeper.  They walked through most of it and it didn’t get deeper than thigh height.  Lema radioed the other drivers that we were proceeding.  He told us to close the windows and I don’t know why, but Mike and I both looked at each other at the same time with huge grins.  WE ARE ADVENTURING IN FREAKING AFRICA!!!!  Lema guns the jeep and we just start plowing through the water.  The water is spitting up EVERYWHERE – so much that we can’t even see out our windows!  Mike took a video of our trip – it doesn’t fully capture the adventure, but my favorite part about this video is Lema – he’s just driving through like it’s just a regular road!

We all think that this will be it – maybe we’ll come across another couple of these but we should be good!  For a little while, that’s exactly what we think.  Then…we are driving along and see all of this traffic.  Tanzania doesn’t have traffic.  Lema says “oh no” and we know that this isn’t just going to be water over the road.  We get a little closer and it looks like someone had a car accident.  It looks like there’s a jeep stuck in a ditch and there are lots of people out of their vehicles down in the ditch.  Lema parks our car behind the others and we get out to go see what’s going on.  The good news is that there was no accident and no one was hurt.  The bad news is that the road washed out and a jeep got stuck trying to cross. 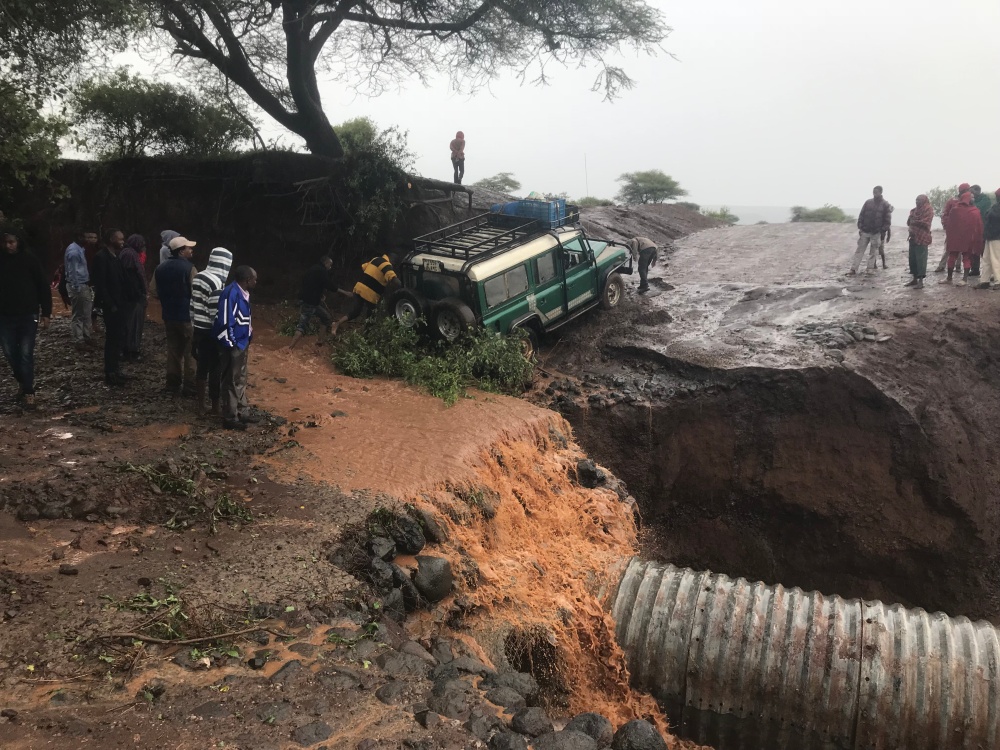 Problem number one is that there is a car stuck in the road.  Problem number two is that part of the road is missing.  There are already a lot of people down there working on problem number one, so Lema, Mark, and our other drivers start working on problem number two.  Mike and I just start observing.  My first observation makes me laugh.  There are mostly men down here and all of them are talking over each other and pointing and gesturing to the jeep.  Even though they are speaking Swahili, it’s clear that they all have their own opinion on how to do this.  I laugh because some things are just universal.  Everyone has an opinion and everyone thinks their idea is the best.  Meanwhile, Lema and Mark are trying to figure out the best way to drive across this and nothing seems great.  The other men have figured out a plan for the stuck jeep.  I see someone bring a shockingly short rope and start tying it to the front of the jeep.  More men come over and there are 4-6 men all grabbing this rope.  The driver gets in the jeep and start is up.  In horror, I start to realize what their plan is.  These 4-6 men are going to PULL the vehicle WHILE THE DRIVER IS ACCELERATING.  This rope is probably no more than about 6 feet long.  Once the driver hits the gas, I turned away because I was 100% sure I was about to see a whole bunch of men get run over.  But all I hear is cheering!  Everyone just goes nuts!  The jeep is unstuck!

Now, problem number two.  Lema and Mark have talked about carving out the hillside a bit to make some room for a vehicle to pass.  I go back to our jeep (it hasn’t stopped raining today) and observe from there.  I see someone come up in a newer vehicle from the other side and a man in a suit gets out.  He goes down to where everyone is working and gestures a little and then gets back in the car and drives away.  One of our other drivers comes up and gets in our jeep to move our jeep up in line.  I asked him who that guy was and he laughed and said it was the local commissioner.  The commissioner heard about the road, came down, told everyone that no one could drive over it and said that he would send a Caterpillar to fix the road.  Well that sounds good, I said.  Our driver laughed and said yeah he’s going to send a Caterpillar – it could get here in four hours or four days!  I looked out my window and no one had stopped working on the road.  In fact, over the next hour or so, I kept seeing pairs of boys walking up from all directions with shovels and hoes.  Word had gotten out that the road washed out and the villages were sending help.

Eventually, the road was ready for passage.  By this time, it had been a couple of hours and a lot of people had turned around to go back the way they came.  As people left, our drivers moved our jeeps up in line so that we’d be among the first to cross once the road was passable.  Our three jeeps were numbers 2-4 in line.  The jeep in front of our group goes for it and MAKES IT ACROSS!!!  Everyone cheers!  But then, things take a turn.  A jeep from the other side starts to come down the hill to cross and there is an immediate roar – everyone is yelling at the driver.  There are men yelling at him, banging on his jeep, and gesturing angrily.  Including two of our drivers!  The driver keeps inching the jeep forward until finally everyone steps away and he crosses.  Later, our drivers told us that he sat in his jeep for all those hours letting everyone else work and so everyone was FURIOUS when he thought he could just take advantage of everyone else’s hard work.

Lema gets into the first jeep of ours and has everyone get out.  He starts across and he makes it!  We all cheer!  He comes back across and gets in the second jeep, unloads it, and takes it across.  Our group starts crossing the road to get into their jeeps on the other side.  Lema comes back and gets in our jeep.  I asked him if he needed us to get out and he said no – he took the other two across and got a good feel for it.  Mike and I (again) look at each other with huge grins.  Lema tells us to make sure we have our seatbelts on because it’s going to be bumpy.  We start across and I look out my window and see just a sheer dropoff.  I have a moment where I think that maybe I should have walked across with everyone else.  But then Lema accelerates and oh boy is it bumpy!  But we make it across!  Safely!  We get out of the jeep on the other side and everyone in our group goes to Lema to hug him and/or shake his hand.  We spend some time just celebrating the fact that we got across this road.  But then it’s time to go!

By this time, we are not going to make the Maasai market.  But we are visiting the Maasai tribe tomorrow, so we’ll still get to experience their tribe!  Our next stop is Ngorongoro Crater!

We get to the front gate and as we pull into the parking lot, Lema tells us to make sure we close all the windows and doors when we get out of the jeep because of the baboons.  He said the baboons will get in the jeeps and steal stuff or just destroy everything.  I laugh, thinking that this is just precautionary, but no joke – as we are driving past parked jeeps, I see one with a door open AND A BABOON JUMPS INSIDE OF IT!!!!  I scream in our jeep – I am so excited and also in awe.  We park and Lema tells us that they have to go pay our entrance fees so we have a little time here.  We get out of the jeep and there are baboons EVERYWHERE.  They are above us in the trees, they are walking around the parking lot, they are perched on the roof of the building, and they are climbing up on jeeps!  I turn around to see another jeep with its door open and sure enough, a baboon runs over and jumps into the jeep.  I start (excitedly) screaming “A BABOON JUST RAN INTO THAT JEEP” – evidently loud enough that the driver of that jeep heard and ran over and started pounding on the outside of the jeep.  The baboon took the hint and ran out of the jeep with something pink in its mouth.  This truly might be the most amazing place I’ve ever been.  These baboons are so naughty and I LOVE IT.

We stand there and I snap pictures and I’m just watching all of them.  I look at the ones on the roof and one baboon comes over to the edge.  Below him (or her) there are flagpoles and it looks like he wants to come down.  Guys, I kid you not – HE JUMPS ONTO THE FLAGPOLE AND SLIDES DOWN LIKE A FIREMAN.  At this point, I’m beside myself and have squealed so much I’m almost positive our group is just going to leave me behind.  I wouldn’t blame them.  Shortly after this, our drivers came back and it was time to leave.  But I got great pictures of the baboons! 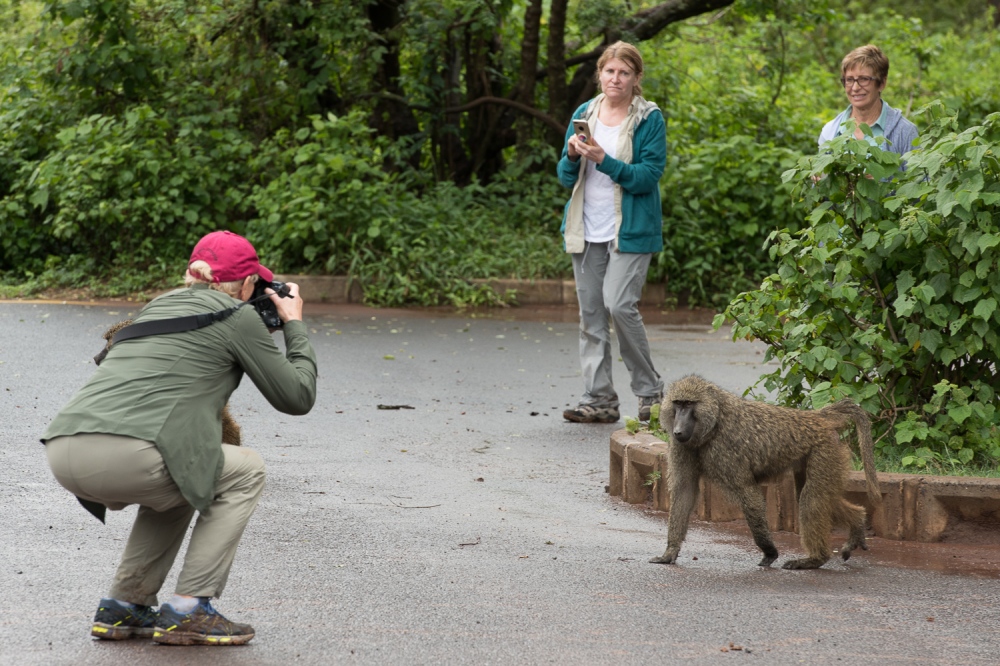 Getting Up Close and Personal, Tanzania, 2018

There’s Something on Your Face, Tanzania, 2018 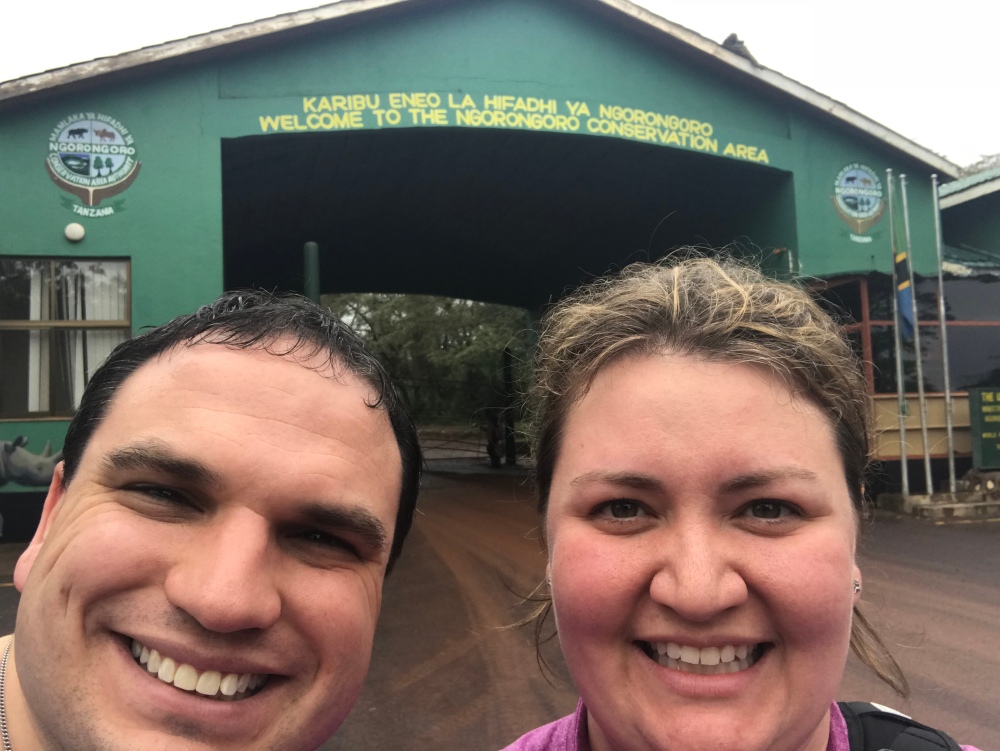 And THIS was the view from our hotel room – we get to stay here for THREE nights!